I will start by saying that, without a doubt, this recipe surprised me the most of any in months! This is a good thing. Don't get me wrong, it's not like I expected them to be bad, but I've never made anything with ground chicken, and I've heard a lot of negative things about using it. But, I followed the recipe as written, using very soft cream cheese, olive oil for the oil and fresh herbs. 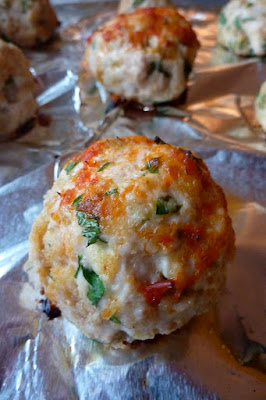 I MIGHT have added a bit more bread crumbs, but I can't say for sure. I did use my 1/8 cup scoop because I only have the use of one hand, currently, so I got about 30 meatballs out of the recipe. :) After mentioning an idea, and getting some feedback in the RE, I decided to try to create a complimentary sauce to serve these with pasta, so I made a sage/cream sauce and tossed it with penne rigate. SO GOOD! :) Thank you, Raquel, for the opportunity to branch out, and mis7up for the "name game" which made me make these, sooner rather than later. :)