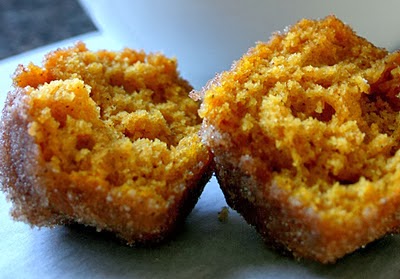 Instructions:
Preheat oven to 350 degrees. Generously grease a 24-cup mini muffin tin with nonstick spray.
In a medium mixing bowl, whisk together the flour, baking powder, salt, cinnamon, nutmeg, allspice and cloves. In a separate large bowl, combine the oil, brown sugar, egg, vanilla, pumpkin and milk until smooth. Add the dry ingredients to the wet ingredients and stir until just combined. Be careful not to overmix the batter.
Divide the batter evenly among the muffin cups, about 1 tablespoon in each cup. (You will have batter left over for about another dozen.) Bake for 10 to 12 minutes or until passes the toothpick test.
Remove the muffins from the oven and allow to cool for 2 minutes, or until just cool enough to handle. With the melted butter in one bowl and the sugar and cinnamon combined in another, dip each muffin into the butter then roll in the cinnamon sugar to coat. Repeat with remaining batter. Serve immediately.