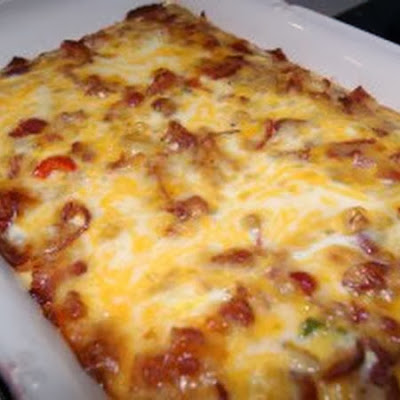 Bacon Breakfast Casserole
Ingredients:
Instructions:
In a 9×13 casserole:
add the TATER TOTS, salt to taste, and pepper to taste.
Bake in a preheated 400 degree oven until TATER TOTS are golden brown.
Remove from oven and set aside. Lower oven temp to 350.
In a mixing bowl:
2 cups milk, and 3 cups shredded cheese. mix well an set aside.
In a frying pan, fry bacon until crisp, then crumble. disgard all bacon grease except 1 tablespoon for sauteing the onion and peppers.
In the same fry pan as the bacon, saute the diced onion and peppers until soft. Layer the onions and peppers on top of the pre cooked TATER TOTS. Layer the bacon crumbles on top of the onions and peppers. Pour the egg and cheese mixture over the bacon layer. COVER with aluminum foil and bake in a pre heated 350 oven for 45 minutes. UNCOVER and bake for an additional 30 minutes.
Share on Facebook
Share on Twitter
Share on Google+
Share on LinkedIn
Newer Post Older Post Home