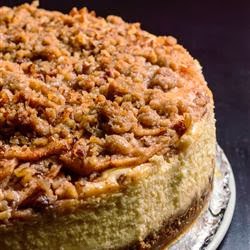 "This is a delicious Apple Cheesecake that I usually make in the fall,,

Preheat oven to 350 degrees F (175 degrees C). In a large bowl, stir together the graham cracker crumbs, 1/2 cup finely chopped pecans, 3 tablespoons sugar, 1/2 teaspoon cinnamon and melted butter; press into the bottom of a 9 inch springform pan. Bake in preheated oven for 10 minutes.
In a large bowl, combine cream cheese and 1/2 cup sugar. Mix at medium speed until smooth. Beat in eggs one at a time, mixing well after each addition. Blend in vanilla; pour filling into the baked crust.
In a small bowl, stir together 1/3 cup sugar and 1/2 teaspoon cinnamon. Toss the cinnamon-sugar with the apples to coat. Spoon apple mixture over cream cheese layer and sprinkle with 1/4 cup chopped pecans.
Bake in preheated oven for 60 to 70 minutes. With a knife, loosen cake from rim of pan. Let cool, then remove the rim of pan. Chill cake before serving.