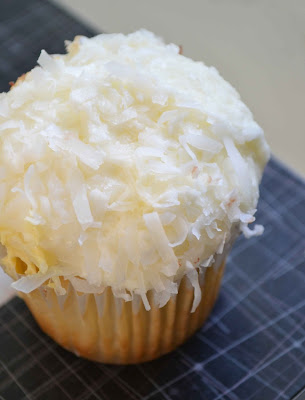 Coconut cream pie, meet cupcake. The best of both worlds, in one hand-held dessert, don’t you think? Who says pouffy, pillowy coconut cream pie should be limited to a pastry crust? These coconut cupcakes are made with coconut milk – in the batter and frosting – and then doused in shredded coconut to simulate a classic diner-style coconut cream pie. And because it looks divine, of course.
Coconut extract is added for an extra boost of coconut flavor. If you don’t have any, substitute vanilla.
Ingredients:

Preheat oven to 350F. Line cupcake pans with paper liners; set aside.
In a large bowl beat the butter and sugar for a few minutes, until fluffy. Add the eggs one at a time, beating after each. Beat in the vanilla.
In a medium bowl, stir together the flour, baking powder and salt. Add about a third to the butter mixture, beating on low speed just until combined. Add half the coconut milk in the same manner, then another third of the flour mixture, the rest of the coconut milk and the rest of the flour. It may look curdled at some point -this is OK.
Fill the prepared muffin cups 3/4 full and bake for 20-25 minutes, until pale golden and springy to the touch. Meanwhile, to make the frosting: beat the butter and half the confectioners’ sugar until smooth; add half the coconut milk, then the rest, and the extract, and the rest of the confectioners’ sugar, beating until you have a spreadable frosting. Cool completely before frosting. If you like, put about a cup of shredded coconut into a shallow dish and dip freshly frosted cupcakes to coat completely. Makes about 2 dozen cupcakes.