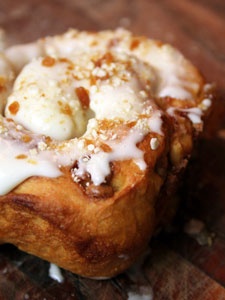 You can use a bread recipe but to make it even easier—easy enough for non-bread makers—use a mix.  You can make it with your bread machine set on the dough cycle or with your stand-type mixer.
If you use your stand-type mixer, use the dough hook and let it beat for about four minutes on medium speed.  The gluten will be developed then.  Roll the dough out on the counter, cover the sheet of dough with a layer of filling and roll it up pinwheel fashion.  Cut slices, put them in a greased pan, and let them rise.  When fully risen, bake them, let them cool, and frost them.