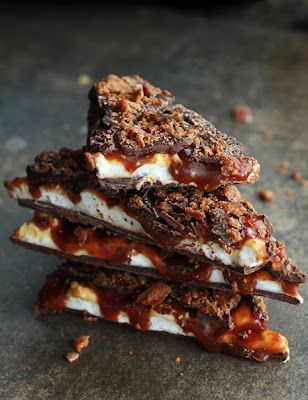 Makes 1 8×8 pan | Preparation: Line pan with parchment or wax paper with a one-inch overhang on each side.
Ingredients:
Instructions:
1. Place chocolate in a bain marie or in a heat-proof bowl above simmering water. Heat on low until chocolate is melted. Pour half of melted chocolate into parchement-lined pan. Then using an offset spatula, spread chocolate until smooth. Transfer pan to freezer to chill for about 5 minutes or until melted chocolate becomes solid.
2. Place marshmallows in a large saucepan and heat until marshmallows starts to just melt and forms web-like strands when stirred. (See picture). Remove from heat and add in 5 tablespoons of whiskey; stir to combine. Spread marshmallow mixture over solid chocolate layer. (To easily spread the marshmallow to an even layer, spray offset spatula with non-stick spray.)
3. Pour caramel on top of marshmallow layer. Then, using an offset spatula, spread caramel until smooth. Transfer pan to freezer to chill for about 5 minutes or until caramel becomes slightly hardened. Pour remaining half of chocolate over caramel layer and, using an offset spatula, spread chocolate until smooth. Sprinkle and gently press bacon crumble into chocolate, Return fully assembled bark to refrigerator to chill for 20 minutes or until bark becomes solid. Bring bark to almost room temperature before cutting.
Bacon Crumble
1. Cook bacon and set aside to cool completely. Once cooled, coarsely crumble bacon with hand; set aside and heat oven to 300 degrees F.
2. Place sugar and water in a pot and heat until sugar is dissolved. Toss crumbled bacon in sugar syrup to coat. Pass coated bacon through a strainer to drain excess sugar syrup.
2. Add egg white to a bowl and beat until fluffy and foamy. Add in black pepper and cayenne. Whisk to combine. Add in crumbled bacon and toss to coat.
3. Spread coated, crumbled bacon on a parchment lined bakesheet and bake for 30 minutes. Remove from oven and let cool, then crumble bacon one last time.
Caramel Filling:
Instructions:
Add sugar and water into a saucepan over medium low heat. Stir until sugar has dissolved. Use a wet brush to remove any crystals that form on the side. Once sugar has dissolved increase heat to high. Now and then, using the handle, give the pot a swirl to keep the mixture moving. Do not stir the mixture directly. The mixture will start to bubble after a minute. As the mixture darkens to a medium amber color, approximately 5-7 minutes, add the butter and heavy cream to saucepan. The mixture will bubble wildly. Whisk to combine (bubbles will subside upon cooling). Set aside to cool completely.
Notes:
- If you are gifting this, best to keep it whole and let the recipient dive in and cut it as they go. But if you decide to cut it up and box it, make sure to place a sheet of parchment between each layer.
- Bark can be kept at rooom temperature for up to two days.
- You may have more caramel then you need, so keep the leftover in a jar to use in or on another dessert.
- To keep a nice sharp edge while cutting the bark: (1) Use a really sharp knife and press the blade’s tip into the bark and then bring the remainder of the blade down into the bark. Depending on the kind of knife you use, most blades are shaped at an angle, so don’t bring the knife down in one push, the uneven pressure will crack the bark. (2) After the bark has set in the refrigerator bring it to room temperature before cutting. This will soften the chocolate and make for easy cutting. If the bark starts to split or start to chip off as you cut, the bark is still too cold to cut.
Share on Facebook
Share on Twitter
Share on Google+
Share on LinkedIn
Newer Post Older Post Home