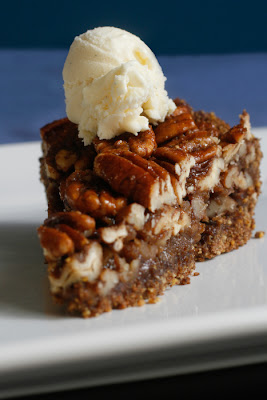 photo by http://windattack.com/
Vegan Maple Pecan Pie
original recipe: http://windattack.com/?windattack_recipe=vegan-maple-pecan-pie
Ingredients:
For the Crust
For the Filling
Instructions:
- Preheat the oven to 350 degrees.
- Mix the almond flour, flax seed and cornmeal in the food processor to mix. With the motor running, slowly add in the salt and cinnamon. Continue blending until the mixture becomes forms crumbly clumps, scraping down the sides of the bowl as necessary. Then slowly add drizzle in the water and maple syrup.
- Transfer the mixture to a 9 inch pie plate and press it into the bottom and sides to form the crust. It is important to make sure the tops of the sides are not to thin, as that it the part that will be exposed to the most heat. Bake the crust for a 10 minutes, then promptly remove and set aside.
- Lightly toast the pecans by spreading them out on a baking sheet and baking them at 350 degrees for 10 minutes. Remove and let cool. Take one half of the pecans and chop coarsely, leaving the other half in tact.
- Whisk together the maple syrup, brown rice syrup and arrowroot in a medium saucepan, then bring up to a boil, stirring often. Once boiling, reduce to a simmer and stir continuously for 5 minutes. Remove from heat.
- Blend together the soy milk, vanilla, salt and flax seed until smooth, about a minute. Let the mixture sit for about 5 minutes. It will become quite thick.
- Whisk the soy milk mixture into the maple syrup mixture until well combined. Fold in the pecans until well incorporated. Pour the mixture into the prepared pie crust and a level out with spatula.
- Bake for 50 minutes at 350 degrees until deep golden brown on top. The syrup may still be bubbling. Let cool thoroughly before serving.
Share on Facebook
Share on Twitter
Share on Google+
Share on LinkedIn
Newer Post Older Post Home