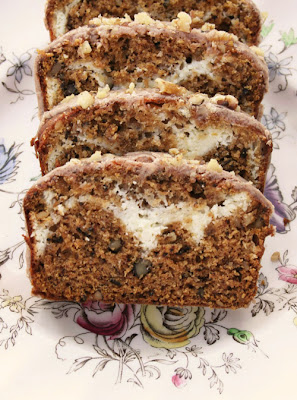 BREAD:
CINNAMON GLAZE :
Instructions:
Preheat oven to 325 degrees. Grease and flour two 8 x 4 x 3-inch loaf pans. In a medium mixing bowl, combine cream cheese, sugar, flour, egg, and vanilla; beat until smooth and creamy. Set aside. In a large bowl, blend 1 2/3 cup flour, baking soda, salt, cinnamon, cloves, ginger, and nutmeg; set aside. In another medium bowl, combine the pumpkin puree, canola oil, eggs and sugar; beat well. Stir the pumpkin mixture into the flour mixture just until combined. Fold in the chopped pecans or walnuts.
Pour half of the pumpkin bread batter evenly into the two prepared loaf pans. Spoon cream cheese mixture on top of the pumpkin batter layers in each loaf pan and then spoon or pour on the remaining pumpkin batter (if you don’t have enough pumpkin batter to cover the cream cheese layer entirely, that’s okay, because you’ll be swirling them together anyway). Take a knife and stick straight down into the top pumpkin batter layer and middle cream cheese layer; swirl the knife around in these two layers, creating a marble effect; this will give the cream cheese filling a nice swirly shape as it bakes.
Bake in a preheated 325 degree oven for 55 to 60 minutes, or until a toothpick inserted in center of the loaf comes out clean. Cool bread in pans for 10 minutes; remove to a rack to cool completely. While waiting for the bread to cool, mix your cinnamon glaze: combine powdered sugar and half & half, blending well; then add cinnamon and mix until smooth and creamy. Note: the cinnamon makes this glaze darker in color, so if you want a lighter, creamy color glaze, just add a dash of cinnamon to the mixture. Drizzle over completely cooled bread loaves and then sprinkle on nuts for garnish.
Share on Facebook
Share on Twitter
Share on Google+
Share on LinkedIn
Newer Post Older Post Home