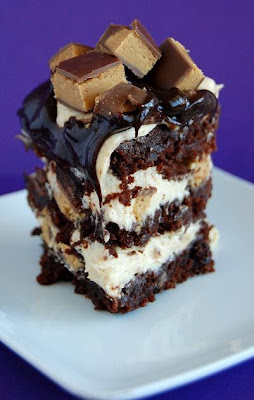 original recipe: http://www.culinaryconcoctionsbypeabody.com/2009/09/11/take-it-outside/
Ingredients:
Brownie Rounds:
Preheat oven to 325F.
Butter and flour Six 4 ½ -inch Diameter Spring Form Pans. Set aside.
Using a stand mixer with the paddle attachment, mix together butter and sugar, about 2 minutes.
Add in egg, egg yolk, and vanilla. Beat another minute.
Pour in cocoa, flour, baking powder and salt. Mix on low speed until fully incorporated.
Fold in chocolate chips until completely distributed throughout the brownie batter.
Using measuring cups, pour a heaping 1/3 of a cup into each of the 6 prepared pans. If there is any batter left over, try to as evenly as possible, add to the prepared pans.
Bake for 20-23 minutes.
Remove from oven and let cool.
Peanut Butter Cream Cheese Mousse:
Using a stand mixer with the whisk attachment, whisk the whipped cream on high until stiff peaks form.
Place into a bowl and set aside.
Add the cream cheese and peanut butter and whisk on medium speed, until fully incorporated. Add powdered sugar and mix until combined.
Add whipped cream back into bowl and whisk on medium high until peanut butter mixture and whipped cream are fully incorporated and the texture is light and fluffy.
Place into a medium sized bowl and set in fridge while brownies fully cool. At least 30 minutes.
Chocolate Ganache:
Place chocolate in a medium bowl.
In a small saucepan bring cream to a boil. Once the boil starts, pour over chocolate.
Let sit 5 minutes.
Whisk until mixture is smooth and glossy.