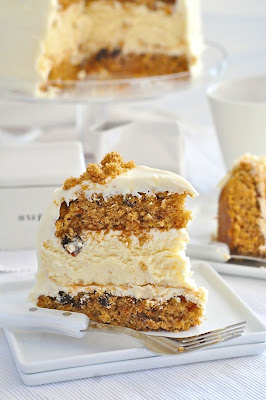 FOR THE CHEESECAKE LAYER
Preheat oven to 350 degrees F.
Butter generously a 9 inch spingform pan. with aluminum foil, cover the bottom & extending all the way up the sides.
Put one package of the cream cheese, 1/3 cup of the sugar, and the cornstarch in a large bowl & beat with an electric mixer on low until creamy, about 3 minutes, scraping down the bowl a couple of times. Blend in the remaining cream cheese, one package at a time, scraping down the sides of the bowl after each. Increase the mixer speed to medium & beat in the remaining 1 cup sugar, then the vanilla. Blend in the eggs, one at a time, beating well after each addition. Beat in the cream just until it’s completely blended. Be careful not to overmix!
Gently spoon the batter into the foil-wrapped springform & place it a large shallow pan containing hot water that comes about 1 inch up the sides of the springform. Bake the cake at 350 degrees F until the edges are light golden brown & the top is slightly golden tan, about 1 1/4 hours. Remove the cake from the water bath, transfer to a wire rack, & cool in the pan for 2 hours, cover with plastic wrap & refrigerate (while still in pan) until it’s completely cold, about 4 hours. Place the cake in the freezer overnight. Leave in the freezer until your ready to assemble the cake.
CARROT CAKE
Preheat the oven to 325 degrees F.
Generously butter the bottom of & sides of three 9-inch round layer cake pans. (you’ll need three layers, 2 for the cake & one to break up into crumbs for the top). VERY IMPORTANT: Line the bottom of all 3 pans with parchment or waxed paper (don’t let the paper come up the sides).
Sift the flour, baking powder, cinnamon, salt, & baking soda together in a medium bowl & set aside.
Place the raisins in a small saucepan, cover with boiling water, cover the pan, & let soak for 20 minutes until nice & plump. Drain well & let stand on a paper towel.
Meanwhile, beat the eggs in a large bowl with an electric mixer on high until light yellow, about 5 minutes. With the mixer still running, gradually add the granulated sugar then slowly drizzle in the oil, then the cream & vanilla. When the batter is light golden & airy, it’s ready (this usually takes 15-20 minutes of beating). Stir in the flour mixture with a wooden spoon, then stir in the carrots, apple, walnuts & raisins. Divide the batter evenly between the 3 cakes pans & bake until the centers come out with moist crumbs., about 45 minutes. Let the cake cool in the pan on a wire rack for 15 minutes, then turn them out on to the rack & peel off the paper liner. Let the cake cool completely, about 2 hours, then wrap each layer & refrigerate.
CREAM CHEESE FROSTING
Beat the cream cheese & butter together in a medium bowl with a mixer on high. Add the confectioners’ sugar, then the vanilla beating until smooth. With the mixer running, gradually add the cream, & beat until the frosting looks whipped & creamy. Add a little more cream if necessary until it’s easy to spread. Set out the carrot cake layer & break the least attractive one into crumbs.
TO ASSEMBLE :
Place one of the remaining 2 layers of cake top side down on a cake plate. Spread with some of the frosting. Release & remove the ring of the springform pan, then remove the frozen cheesecake from the bottom of the pan. Place the cheesecake on top of the frosted layer of carrot cake top side down & spread with some icing. Top the frosted cheesecake with the remaining layer of cheesecake, top side up. Ice the top & sides of the cake with remaining frosting. Decorate the top edge of the cake with a ring of the cake crumbs about 2 inches wide. Refrigerate the cake until ready to serve (it takes about 2 hours for the frozen cheesecake layer to thaw). Use a sharp straight edge knife to cut in. Not serrated)
Share on Facebook
Share on Twitter
Share on Google+
Share on LinkedIn
Newer Post Older Post Home