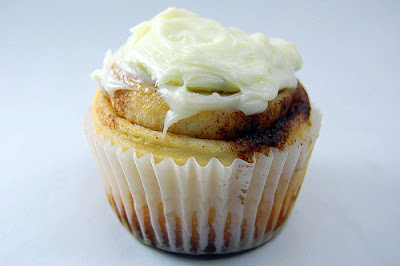 Dissolve the yeast and 1/4 cup of the granulated sugar in the warm milk in a large bowl and let stand for about 10 minutes until foamy.

Mix in the eggs, butter, salt, and other 1/4 cup of granulated sugar. Add flour and mix until well blended and the dough forms a ball. Turn out onto a lightly floured surface, and knead about 5-10 times. Place in an oiled bowl, cover and let rise in a warm place until doubled in size (about one hour).

After the dough has doubled in size, turn it out onto a lightly floured surface, cover and let rest for 10 minutes. In a small bowl, combine brown sugar and cinnamon. Line cupcake pan with cupcake liners, and lightly spray over the top of them with cooking spray.

Roll dough into a 12x22 inch rectangle. Spread dough with 1/3 cup butter and sprinkle evenly with sugar/cinnamon mixture. Roll up dough and cut into 24 rolls using dental floss or a pastry cutter. You may have to unroll each roll and re-roll in order for the dough to fit in a cupcake tin.

Place each roll in a cupcake liner. Cover and let rise until nearly doubled, about 30 minutes. Alternatively, allow to rise overnight in the refrigerator. Meanwhile, preheat oven to 400 degrees Fahrenheit.